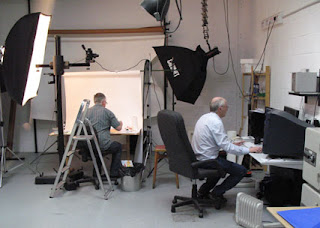 I type this sleepy eyed from a sleepy little B&B in a sleepy little village in Suffolk as my body tries to come to terms with the major physical jolt that is casually referred to as ‘moving the clocks back’. I find as an artist who is no longer on the treadmill of clocking in at specific times that the adjustment back to a normal routine takes longer and longer. In old money, the time would be 7:45, I’d be warm and cosy in bed and just looking forward to my full English. As it is, it’s only 6:45 and I can’t sleep….

This time last week or should I say This old time last week, I was getting up in another B&B in Tunbridge Wells, or had I got another hour to go? I find time shifts more confusing than watching Back to the Future…

Anyway, It was the first day of a three day session at the Search Press Studios to photograph and document my work as I produced three step by step paintings for my book, How To Paint Flowers in Acrylics. I’d arrived the previous night driving along the now slumbering M25. Upon arrival in Southborough (a suburb of Tonbridge), I expended my year’s allocation of parking petrol looking for a space to put my car. Eventually, I managed to manoeuvre into a tight spot somewhere near Hastings. Nightmares ran through my head of someone breaking in and stealing all my precious paintings and so with a lot of huffing and puffing, I made several sweaty trips to the B&B, humping all my work and art equipment into the safety of the boarding house.
The next day, I arrived at the studios to meet Edd (my editor!) and Paul (the photographer) after coffees and settling in, I was directed to a small table surrounded by massive lights, booms and very expensive cameras. To one side was a set of computer screens and equipment that would put Goonhilly to shame. Nervously, I squeezed into position, tucked my elbows in and started to work on the first of the set pieces. Edd sat besides me and studiously made notes of my technique, thoughts and colours. Periodically, I would pause for photographs to be taken of key features. The camera would be swung in at all angles and sheets of polystyrene would be wedged under my nose to help cut reflections and get that perfect shot. This went on for several hours with a break for lunch. By the end of the day, exhausted, two of the paintings had been completed, it was good to be so well on. On the second day I completed the last canvas and then did all the twiddley bits to camera, brush strokes, palette knife techniques and more polystyrene. On the third day I could rest, as Juan, the artistic director was summoned. Artistic directors are like artists but much more focussed on minutia. As we delight in rusty old barns, so Juan would take great delight in examining my old tubes of paint, broken worn out brushes or become fascinated by the patina of paint around the lip of the jug I store my brushes in. Even I became quite enthusiastic about the beauty of a close focus shot of the edge of a piece of curved canvas sheet.
Things were running very smoothly until there was a loud BANG! We all simultaneously jumped out of our skins! After putting them back on, we looked to the right at all the heaters, wires and lights, Paul ran over and frantically started sniffing all his equipment. Unable to find anything, we suspected that a heater had shorted out. Paul looked relieved that none of his expensive equipment was damaged. We continued until lunchtime and then called it a wrap.
I made it back on the M25 before it woke up again and was home by teatime.
Posted by Tim Fisher Artist at 03:38 No comments:

Tim Fisher Artist
Tim Fisher was born in Leicestershire and has had a life long interest in art. However, his early life took a different turn working in engineering and research. Meanwhile, art became an all consuming hobby until he became a professional artist in 2000. He is well known for his love of colour and experimentation and works in a wide range of mediums to achieve this end. Many of his paintings have been produced as fine art prints and cards. The originals can be found in public and private collections throughout the world. Tim is a regular contributor to the Leisure Painter magazine. He also runs workshops and painting holidays as well as demonstrating to art groups throughout the UK.